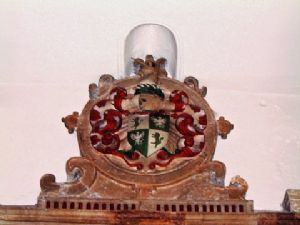 Motto: Quand Je Puis (When I Can.)

During the time of  Henry VIII's break from Rome and the establishment of his own Church, influential Catholic families, whose behaviour could be monitored were not persecuted but often recruited to bolster the administration and secure their adherence through the advantages of offices under the crown. As you will see from the family history, this was the case for the Shireburne family of Stonyhurst - a wealthy, powerful and prestigious family in the North-west of England who remained immovably loyal to their Roman Catholic faith throughout the most dangerous political and religious crises of Tudor and Stuart England.

While some Catholics, fled and plotted abroad, and others risked open opposition and were penalised heavily, many, like the Shireburnes, kept their faith quietly (albeit as openly as they could get away with) and made themselves useful to the crown to enhance their standing and minimize the threat. Crucially important – and only recently explored and understood in detail – was the practice of Catholic families building strong, mutually supportive “connections” via strategic marriages, dispositions of properties through wills and the making of politically-orientated partnerships, often in shared official roles. Such relationships often were reinforced over several generations; each family became intimately related to the others.

Locally, the Shireburnes were tightly tied to the Walmsleys of Dunkenhalgh, the Starkies of Huntroyd, the Towneleys of Burnley, the Molyneux (the family of the Dukes of Derby) and the Tempests (of Broughton Hall and Northumberland). Over the north they were very close to leaders of Jacobite interests including the protestant Grahams (and family of Lord Preston) from Cumberland and the unswervingly Catholic Widdringtons (leaders of the 1715 Jacobite Rising) from Northumberland. It is the nature of Upper Gentry families to intermarry to secure and expand wealth and “position”, but it is notable that all these families allied themselves exclusively to trusted Catholic Jacobite families.

Click on the links below to find out more about the following members of the Shireburne family: