He became the representative of the Earl of Derby (his first wife's uncle) in governing the Isle of Man  and he appears to have had a love of music, owning two organs, virginals, a lute and set of wind instruments.  He acquired a punning nickname 'Fiddle of God' based on his motto 'Fidele de Dieu' and his fondness for music.

Richard married three times.  In 1578 he married Catherine Stourton (or Sturton), daughter of Lord Stourton and, as we have seen, a niece of the Earl of Derby.  It appears they had five children, but two died in infancy, while his heir, Hugh, died without issue in c.1628 just before his father.

His second son - another Richard (the third of that name) - thus inherited.  The other surviving child was a daughter, Catherine, who married William Pennington of Muncaster; she is the subject of the memorial wall-plaque above the door leading into the church yard from the family chapel.

Richard's first wife Catherine, died in the Isle of Man in 1591, though the will of Richard expressed the wish that her body be brought from there and re-interred with him at Mitton.

There is a wall memorial in Shireburne Chapel (see image below) which depicts Richard and his first wife, Catherine (also spelt Catharine) facing each other and kneeling at a prayer desk. Their children are depicted in the panels below.

Richard's second wife, Ann (nee Kighley), was the widow of Thomas Houghton of Houghton Tower; there were no children from this marriage and she died in 1611.

His third wife Anne, nee Holden, seems to have been very young when they married, as she did not die until 1665, some 36 years after her husband's death. 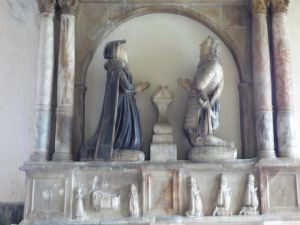